Four days on from the hatching of the first eggs, there’s no sign of the fourth egg following suit, and it’s looking almost certain that three chicks will be the final brood size.  This would be quite normal, if a little disappointing, and was exactly what happened last year, when three of four eggs hatched, with two of the chicks going on to fledge successfully.  What happened to the third chick will never be known, though there are several possible explanations: it may have perished in poor weather in the early stages of growth, or may have received less food than the others if it hatched later or was weaker.

The fourth egg is still apparently being incubated, and the adults have been turning it as they pull it under their breast, but is also often being pushed out from under the adult as the chicks grow.

Some interesting behaviour was noted recently as the chicks moved towards the front edge of the nest platform when being fed, as can be seen in the picture below.

The female returned a couple of minutes later and moved the chicks back towards the rear of the platform.  How tender and caring you might think, but the moving was done by picking each chick up by a wing or the back of the neck, so certainly caring but less than tender. 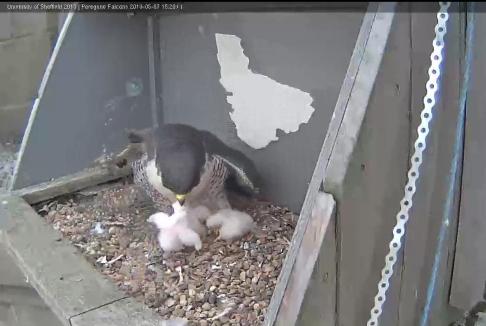 (Thanks to David Williams for these great grabs.)

The chicks seem to be made of tough stuff, and the coming days of wet and windy weather will test that, with the female offering a very effective umbrella for most of the afternoon today.

The non-sitting adult is often around the church tower at present, and a few people have been enjoying the good views and photo opportunities that are on offer, so a visit in person is definitely worthwhile.