The juvs have been making a few flights to nearby University buildings around St George’s over the last couple of days, but the adult female in particular appears agitated when they’re away from the tower and has repeatedly been encouraging them to return from other perches. 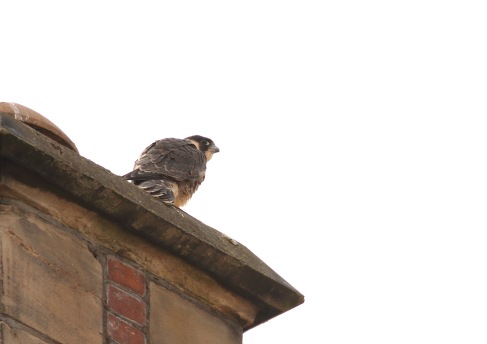 Yesterday evening one was on the Jessop Building (above), but had moved from there by this morning.  The female took a Feral Pigeon in to feed it, but returned shortly after to retrieve it, apparently as a means of coaxing it away.

The Peregrines weren’t the only raptor to be spreading their wings in the area yesterday evening, and an Osprey passing through heading east provided an amazing spectacle, all the more so as both adults took exception to its presence and mobbed it very heavily.

Their pursuit of the Osprey was not limited to buzzing it, and they struck it on several occasions, looking like they meant it! 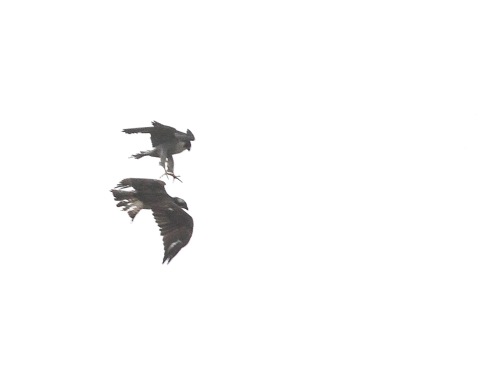 Needless to say the Osprey didn’t hang around and moved off towards the Don Valley.

After that there was time to spot the moon in an enticing position behind the church and take a few shots that tried to capture the magic of the scene.  Quite a few people recently have commented that they’ve made their first visit to the site after watching on the webcam over recent weeks, and all have said how wonderful it is to see the birds ‘live’ and get a better appreciation of them and the location.

This lunchtime (Sunday) both adults were on the church and two of the juvs were on the ledge at the level of the nestbox, but the third was not visible.  The juvs have occasionally returned to the platform, and can hop between there and the ledge quite comfortably, so are likely to hang around for a few more days if you do have the chance to visit.