Back from a spell away with work, the change in the appearance of the chicks over the last ten days is nothing short of remarkable.

The shot on the left was taken when they were almost four weeks on from the date of first hatching, with the shot on the right taken today.  There is some difference in size as they continue to grow, but the change in plumage is plain to see as they moult out their down, helped by sustained preening and some vigorous wing-flapping.  At times over the weekend during a couple of visits, there was a shower of downy feathers floating around the nest as they continued to rid themselves of the remains of their original downy coat.

The immatures (they now look a bit big to be called chicks) still have a few bits of down, notably on their heads, and are spending ever more time on the edge of the nest platform watching the world around them and getting used to their surroundings.

They are also starting to become quite lively, with much exercising of their wings, especially after a feed, and are hopping about fairly confidently though I’ve yet to see one on top of the box, which was a prelude to the first flight last year.  In the shot above, the much darker underwing compared to the adult birds is obvious, and in the shots above the other key identification features that will allow the immatures to be told from the adults for months to come can also be appreciated: rich brown upperparts, buff-washed underparts, vertical markings on the breast (horizontal on adults), and the grey-blue base to the bill (properly known as the cere) and eye ring.

Another change in recent days is more aggressive behaviour between the immatures on occasion, apparent today as they squabbled over a dead Pigeon that had been left in the nest by the female. 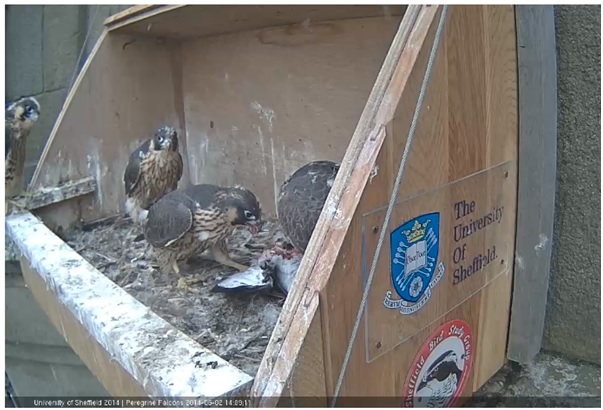 They proved quite expert at rendering the meat from the bones and fed at length on their own.  The supply of Feral Pigeons (and occasional Starling) has been so plentiful that it’s hard to believe they need to engage in serious fighting for food.  An early visit on Sunday morning saw both the male and female bring in prey to the nest, the male plucking his item on the crane, which he’s adopted as a regular perch when not in use.  And when it is in use the adult do not seem to be disturbed, even when the arm passes close to the church tower.  However, when the crane driver climbed up to his cabin at about 7.30 on Sunday there was a lot of calling and agitation, with the female flying off and circling the crane. 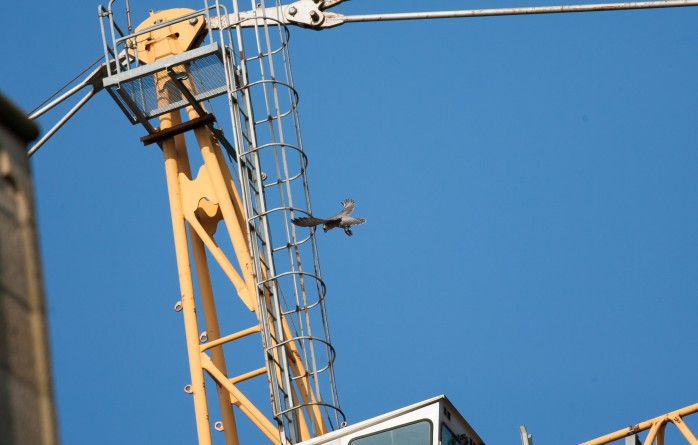 After a couple of minutes the driver was in the cabin and things had settled down again.  A chat with the staff in the site office this morning revealed that they’re keeping an eye on things and that this agitation when the crane driver climbs up has been a recent development, noted in the last few days.  Apparently, this morning the crane operator kicked a stashed prey item off the jib behind his cabin, which one of the adults unsuccessfully tried to retrieve in mid air: they are certainly far more accustomed to – and tolerant of – humans than birds out in the Peak District.

Something else I noticed on Sunday morning was the number of times Swifts came zooming past the church, especially within a few metres of the platform.  My suspicion is that they’re taking advantage of the flies that are hanging around, drawn in by the prey remains in the nest and on the ledge. 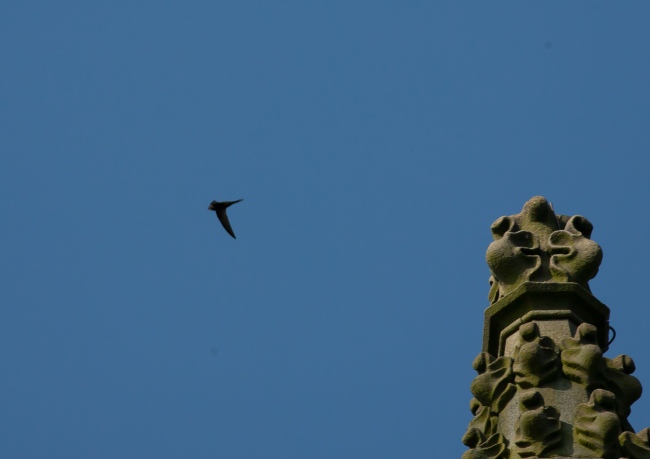 Swifts are always a challenge to photograph, but the proximity to the church can just about be appreciated and if they’re reducing the flies in the area they’re providing a useful service in also reducing the risk of disease and illness for the young birds.

To end tonight’s post, a few action shots to enjoy (thanks to Andy J for the second of these, and for the young bird flapping above), and a look ahead for the week.

With the Peregrine talk in St George’s on Thursday timed to coincide around the likely first flight, I’ve been doing some calculations based on what I’ve read and happened last year.  Ratcliffe gives an average period of 78 days between laying of the first egg and fledging: 6 days for clutch completion, 30 days for incubation and 42 days for fledging.  He also gives an average fledging date of 20 June for South-West England, with up to a week later from Wales northwards.  We’re clearly well ahead of that schedule (climate change since the 1960s-70s?), and were for the last two years, when the first flight was on 12th June.  Last year the first egg was laid at St George’s on 27th March, with a gap of 39 days to the first hatching on 5th May, then a further 38 days to the first flight, a total of 77 days.  This year the first egg was laid on 20th March, with a gap of 39 days to the first hatching (28th April).  If the same pattern holds true, 77 days falls on 5th June, the day of the talk!  Whether or not thing will be so clockwork remains to be seen, but I’ll be very surprised if at least some of the chicks have not flown by next weekend.

Thanks to those of you who have sent words of appreciation for the pleasure the Peregrines have brought you: it’s great to know the enjoyment is being shared!  Keep watching to make the most of the last few days of webcam action and hope to see you at St George’s on Thursday, 6-7 for a watch (weather permitting, and it’s looking promising) and then 7-8 for the talk inside. 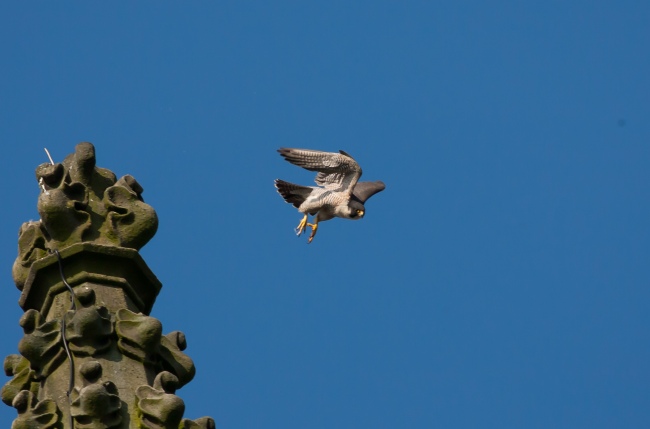