We have an egg! The first egg was laid at 5.52 this morning, the first day of British Summer Time. Thankfully somebody was watching at that time. This is the moment, thanks to Alan!

You can just see the egg peeping out! Let’s hope this is the start of a smooth and successful breeding season for the St. George’s pair. It’s the next milepost along the way after strong pair affinity to the territory throughout the winter and numerous March copulations.

There has been recent speculation that things weren’t going to plan this year with a possible third bird hanging around (not again!) and seemingly less interaction between the birds in the last week or so. But then again maybe they knew something that we didn’t? It may well be difficult to keep track of all the comings and goings this year now that we are all housebound and unable to get down to St Georges to take in the bigger picture. Not to mention the reorganisation and crisis management many of us are trying to manage in our day jobs! Peregrine watching this year will be limited to webcam watching more than ever.

Laying is a week or so later than we have been used to expecting down the years but this is a new pair so they may like to do things differently! No two birds are exactly the same. Up and down the country various (well monitored) Peregrine pairs are at slightly different stages of breeding with some pairs already down to full-time brooding a complete set of eggs (e.g. Norwich) and other pairs only recently into the copulation stage (Leeds Uni). Most places are somewhere in the egg laying phase so Sheffield Peregrines are by no means lagging behind now we’ve joined the egg club.

Like many other birds Peregrines will keep their eggs warm as they arrive, one at a time, usually a day or two apart but they may leave the eggs unattended from time to time for short periods. This is perfectly normal. Only when the final egg has been laid does the diligent, round-the-clock, constant incubating commence. During this period the eggs will only ever be exposed to the outside temperature for very brief moments and this very infrequently, for example when the birds change over or if the female turns the eggs.

Since the Webcam was installed in 2012 we’ve been able to follow and record the nest activity and the data across that time tells us that generally the first egg has started to hatch 31 or, more commonly, 32 days after the last egg was laid. Clutches can be 3 – 5 eggs but most commonly in Sheffield with the previous pairing we have had four eggs. Eggs should be laid roughly every two days over the space of a week (based on a 4 egg clutch) so keep watching but especially in the first 12 hours of Tuesday.

The previous blog post mentioned J.A. Baker’s 1967 book ‘The Peregrine’ which is considered a classic of nature writing.  The book was re-printed for its 50th anniversary in 2017 and is as relevant today as it was when originally published.  Part behavioural knowledge through careful observation, part wonder and awe, the book is an evocative description of watching Peregrines in the big skies of his coastal patch over the course of 7 months.  It is beautifully written.

Blog reader sydsycamore pointed out that the book featured on Radio 4 as Book of the Week late last year, read by none other than Sir David Attenborough.  Baker’s stirring account and lyrical language delivered perfectly in Sir David’s soothing and familiar tones.  The 9 episodes are available on BBC Sounds website and App until December   https://www.bbc.co.uk/programmes/p07xhbdk

I urge readers to both buy the book and the download the podcast.  Thanks Syd! 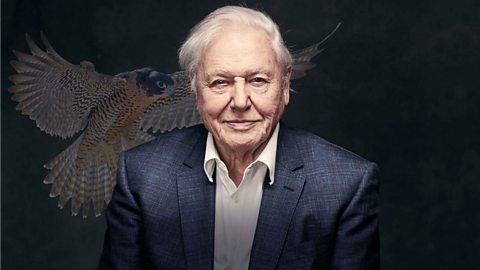 A nice view at sunrise this morning. If you are used to watching the webcam with the sound turned up you’ll notice how much quieter it is. Far less traffic than normal but still the odd emergency services siren. How much notice do the birds take of us humans? Have they noticed that there are less of us about? That there’s less noise and probably less pollution? Or do they have eyes only for the next potential meal or unwanted intruders?

There are some things which we will probably never know. It’s over 50 years since J. A. Baker published his classic and acclaimed nature book ‘The Peregrine,’ his careful observations made a huge leap in public knowledge and passion for these birds. It’s the advent of Nest webcams such as ours which is in part pushing knowledge of their behaviour on from Baker’s teaching. I wonder what he would have made of the 24 hour cameras?

As expected the birds spent more and more time at the nest platform as February progressed and by the beginning of March the female was seen, on numerous occasions, shuffling down making potential nest forms – slight depressions in the gravel substrate in which, typically, the eggs can be laid.  This behaviour is something we are familiar with from watching the many urban Peregrine nest platforms across the UK and North America which are rigged up with webcams.

Most, if not all, of these man-made platforms are wooden ledges filled with a layer of small, smooth gravel.  In the wild we might expect to see this behaviour replicated by birds such as the Scarborough pair who nest on the soft cliffs below the castle.  Closer to home, birds I’ve seen in the Peak District breed on much harder, bare rock cliffs where forming a nest depression may not be so simple.  Such nests are viewed very carefully at long range so it’s not possible to tell.  I must remember to quiz the local raptor workers on this when I get the chance to speak to them.

As we haven not seen this female attempt to nest before, observing her display this behaviour is a positive.  It’s what we are used to seeing at this time of year but who knows whether she has even attempted to breed before?  There’s no way of knowing.  This week has seen numerous and increasingly frequent copulations from the birds –  Thanks as ever to Alan @doggie3132 for the screen grab video (scroll to about 2 mins 9 secs.)

So far, so good!  However given the events of 2019 I doubt any of us are taking anything for granted.  All we have to go on are the lay dates for the previous female who was as regular as clockwork from 2014-17, laying her first egg on the 19th or 20th March each year come rain, snow or shine.  She kept us waiting a little longer in 2018, laying on the 22nd.  It was a day later still in 2019 (23rd) but by that time we had already had the first intrusion by our present hen falcon and we’ll never know if the small delay was stressed induced or perfectly normal.

I wouldn’t say copulations are late this year but they certainly haven’t been early.  It’s worth looking out for signs of imminent egg laying from around the 19th of March but it wouldn’t be of concern if we had to wait until later in the month.  Anything could happen  this year, inexperienced birds can attempt to breed but fail at any stage.  We may get 3 eggs, 4 eggs, early eggs, late eggs or no eggs at all.  We may get chicks but will the parents raise them well enough to survive and fledge?  Or will we see another intruder enter stage left a precisely the wrong moment?  It may take more than one year and more than one breeding attempt for this pair to establish themselves as a successful pair.  The only way to find out is to keep watching!

Speaking of dates: the SBSG Review of the Birding Year (and AGM) takes place tomorrow, Weds 11th March, 7.15pm in the University of Sheffield Diamond Building (downstairs – Lecture Theatre 2) located right next to St. Georges.  All welcome and entry is free.  Drinks afterwards in the University Arms.